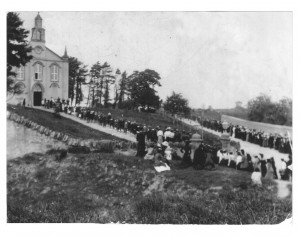 The present Church of Our Lady’s Nativity dates back to 1833 and replaced the previous church which was built around 1750. This 1750 church was built on the banks of the Rye and is now the scouts’ den for the Leixlip Scout Unit.

After Catholic Emancipation in 1829, permission was granted to Father Patrick Savage, the Parish Priest of Maynooth, to build a bigger church to accommodate the increasing Catholic population. The church was built on a site granted by Colonel Edward Connolly of Castletown in the year 1833.

The church was built by local effort. The Catholic population were then very poor but their faith was strong and in their free time, after work, they quarried and carried stone used for its construction from the adjacent quarry, so it can be truly said that it was built by free labour.

Leixlip, which had been part of Maynooth Parish since 1615, became an independent parish in June 1971 and Father Christopher Hyland, RIP, was appointed as its first Parish Priest. (Since 1984 a second parish in Leixlip has been established on the Confey side of the town.)

In 1991 the church underwent a major extension and renovation. Two transepts were added to accommodate the growing population of Leixlip.

We extend sincere thanks for your support during the Coronavirus pandemic

A key part of our work as a parish is to ensure that the highest standards of safeguarding (including GardaVetting) are maintained within our parish. Our parish safeguarding reps ensure these standards and guidelines are carried out in all activities taking place in the Church and with all children’s groups using our Parish Centre.

Adoration of the Blessed Sacrament